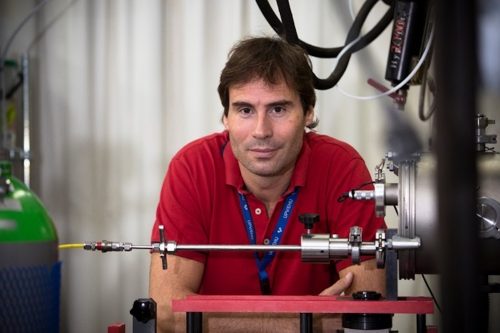 In 2006 he moved to Oxford University and worked with Professor John P. Simons, to join the internationally leading research group studying carbohydrates in the gas phase.

In January 2009 he joined the University of the Basque Country, where he leads research focused on solving various structural problems of chemistry at the molecular level, in particular, the study of biomolecules, including sugars, peptides and drugs, generated and stabilized in the gas phase. His career has been recognized with several prizes.

In 2005, Emilio J. Cocinero was recognized as winner of the Flygare Award for outstanding contributions in molecular spectroscopy by an early career independent scientist.

In 2012 the Spanish Royal Society of Chemistry (RSEQ) awarded Dr. Cocinero with the SIGMA-ALDRICH prize for the best scientific career of a Spanish young researcher and the SusChem society also awarded him with POSTDOC SusChem prize for the best scientific publication in 2011 conducted by a Spanish young researcher in any area of Chemistry.

The Role of Non‑Covalent Interactions on Cluster Formation: Pentamer, Hexamers and Heptamer of Difluoromethane

Laboratory Observation of, Astrochemical Search for, and Structure of Elusive Erythrulose in the Interstellar Medium

Halogen bond and internal dynamics in the σ–complex of pyridine-chlorotrifluoromethane: A rotational study

Center for Astrobiology: Toward the RNA-World in the Interstellar Medium—Detection of Urea and Search of 2-Amino-oxazole and Simple Sugars

Conformational impact of the aliphatic side chain in local anaesthetics: benzocaine, butamben and isobutamben

A general treatment to study molecular complexes stabilized by hydrogen, halogen and carbon bond networks: Experiment and theory of (CH2F)n···(H2O)m

Interactions between azines and alcohols: a rotational study of pyridine–tert-butyl alcohol

Water Sculpts the Distinctive Shapes and Dynamics of the Tumor-Associated Carbohydrate Tn Antigens: Implications for Their Molecular Recognition

Shapes, Dynamics, and Stability of β-Ionone and its two mutants evidenced by High-Resolution Spectroscopy in the Gas Phase

Investigating the Conformation of the Bridged Monosaccharide Levoglucosan

Understanding the role of tyrosine in glycogenin

Influence of the Anomeric Conformation in the Intermolecular Interactions of Glucose

Effects of Chlorination on the Tautomeric Equilibrium of 2-Hydroxypyridine: Experiment and Theory

Scopine Isolated in the Gas Phase

Chiral recognition and atropisomerism in the sevoflurane dimer

Structural Distortion of the Epoxy Groups in Norbornanes: A Rotational Study of exo-2,3-Epoxynorbornane

Competition between weak hydrogen bonds: C-H⋯Cl is preferred to C-H⋯F in CHClF-HCO, as revealed by rotational spectroscopy

Halogen-Halogen links and internal dynamics in adducts of freons

How water interacts with halogenated anesthetics: The rotational spectrum of isoflurane-water

Interactions between alkanes and aromatic molecules: a rotational study of pyridine-methan

Interactions between freons and aromatic molecules: The rotational spectrum of pyridine-difluoromethane

Internal dynamics in Halogen-Bonded adducts: A rotational study of chlorotrifluoromethane-formaldehyde

Pseudorotational Landscape of Seven-Membered Rings: The Most Stable Chair and Twist-Boat Conformers of epsilon-Caprolactone

Static and Dynamic Properties of 1,1 '-Bi-2-naphthol and Its Conjugated Acids and Bases

Accurate semiexperimental structure of 1,3,4-oxadiazole by the mixed estimation method

Magic numbers in the solvation of the propofol dimer

Rotational spectra of bicyclic decanes: The trans conformation of (-)-lupinine

Shaping Micelles: The Interplay Between Hydrogen Bonds and Dispersive Interactions

The CM-, MM-, and sub-MM-wave spectrum of allyl isocyanide and radioastronomical observations in orion kl and the sgrb2 line surveys

A combined spectroscopic and theoretical study of propofol·(H2O)3

A Spectroscopic Approach to the Solvation of Anesthetics in Jets: Propofol(H2O)(n), n=4-6

A spectroscopic approach to the solvation of anesthetics in jets: Propofol(H2O)n, n = 4–6

Exploring microsolvation of the anesthetic propofoL

Proton Tunneling in Heterodimers of Carboxylic Acids: A Rotational Study of the Benzoic Acid-Formic Acid Bimolecule

Ribose Found in the Gas Phase

Single Hydration of the Peptide Bond: The Case of the Vince Lactam

Competing hydrogen bonding in methoxyphenols: The rotational spectrum of o-vanillin

Sensing the anomeric effect in a solvent-free environment

Conformational equilibria in vanillin and ethylvanillin

N-Methyl stereochemistry in tropinone: the conformational flexibility of the tropane motif<

Carbohydrate-aromatic interactions: A computational and IR spectroscopic investigation of the complex, methyl α-l-fucopyranoside · toluene, isolated in the gas phas

Hydration of Sugars in the gas phase: Regioselectivity and conformational choice in N-acetyl glucosamine and glucose

Molecular recognition in the gas phase: benzocaine-phenol as a model of anaesthetic-receptor interaction

The building blocks of cellulose: the intrinsic conformational structures of cellobiose, its epimer, lactose and their singly hydrated complexes

The intrinsic conformation of a Lewis antigen: the Lewis × trisaccharide

Probing the glycosidic linkage: secondary structures in the gas phase

The shape of leucine in the gas phase

The shape of neutral sarcosine in gas phase

Conformations of α-aminobutyric acid in the gas phase

Coded amino acids in gas phase: The shape of isoleucine

Shape of 4(S)- and 4(R)-hydroxyproline in gas phase

The shape of neutral valine

The structure of neutral proline