Our paper “Center for Astrobiology: Toward the RNA-World in the Interstellar Medium—Detection of Urea and Search of 2-Amino-oxazole and Simple Sugars” accepted in Astrobiology

In the past decade, astrochemistry has witnessed an impressive increase in the number of detections of complex organic molecules. Some of these species are of prebiotic interest such as glycolaldehyde, the simplest sugar, or aminoacetonitrile, a possible precursor of glycine. Recently, we have reported the detection of two new nitrogen-bearing complex organics, glycolonitrile and Z-cyanomethanimine, known to be intermediate species in the formation process of ribonucleotides within theories of a primordial RNA-world for the origin of life. In this study, we present deep and high-sensitivity observations toward two of the most chemically rich sources in the galaxy: a giant molecular cloud in the center of the Milky Way (G + 0.693-0.027) and a proto-Sun (IRAS16293-2422 B). Our aim is to explore whether the key precursors considered to drive the primordial RNA-world chemistry are also found in space. Our high-sensitivity observations reveal that urea is present in G + 0.693-0.027 with an abundance of ∼5 · 10-11. This is the first detection of this prebiotic species outside a star-forming region. Urea remains undetected toward the proto-Sun IRAS16293-2422 B (upper limit to its abundance of ≤2×10-11. Other precursors of the RNA-world chemical scheme such as glycolaldehyde or cyanamide are abundant in space, but key prebiotic species such as 2-amino-oxazole, glyceraldehyde, or dihydroxyacetone are not detected in either source. Future more sensitive observations targeting the brightest transitions of these species will be needed to disentangle whether these large prebiotic organics are certainly present in space. 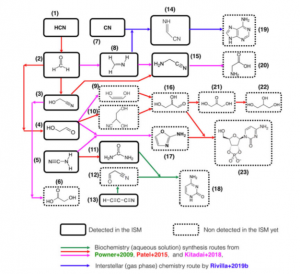 The paper has been accepted by Astrobiology.

Share
Previous Our paper “Conformational impact of the aliphatic side chain in local anaesthetics: benzocaine, butamben and isobutamben” accepted in Chemical Communications 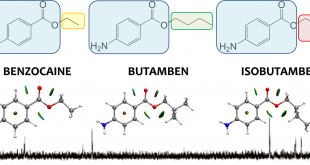 Our paper “Conformational impact of the aliphatic side chain in local anaesthetics: benzocaine, butamben and isobutamben” accepted in Chemical Communications 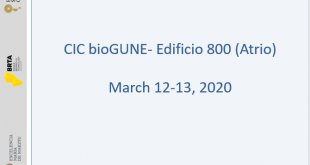 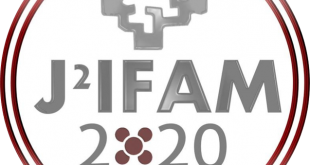 XII Conference of Young Researchers in Atomic and Molecular Physics (J2IFAM 2020) takes place at the UPV/EHU!