The constitution, configuration, and flexibility of the core sugars of DNA molecules alter their function in diverse roles. Conformational itineraries of the ribofuranosides (fs) have long been known to finely determine rates of processing, yet we also know that, strikingly, semifunctional DNAs containing pyranosides (ps) or other configurations can be created, suggesting sufficient but uncompletely understood plasticity. The multiple conformers involved in such processes are necessarily influenced by context and environment: solvent, hosts, ligands. Notably, however, to date the unbiased, “naked” conformers have not been experimentally determined. Here, the inherent conformational biases of DNA scaffold deoxyribosides in unsolvated and solvated forms have now been defined using gas-phase microwave and solution-phase NMR spectroscopies coupled with computational analyses and exploitation of critical differences between natural-abundance 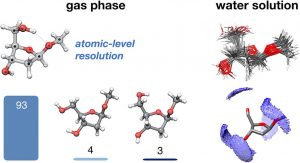 isotopologues. Serial determination of precise, individual spectra for conformers of these 25 isotopologues in alpha (α-d) and beta (β-d); pyrano (p) and furano (f) methyl 2-deoxy-d-ribosides gave not only unprecedented atomic-level resolution structures of associated conformers but also their quantitative populations. Together these experiments revealed that typical 2E and 3E conformations of the sugar found in complex DNA structures are not inherently populated. Moreover, while both OH-5′ and OH-3′ are constrained by intramolecular hydrogen bonding in the unnatural αf scaffold, OH-3′ is “born free” in the “naked” lowest lying energy conformer of natural βf. Consequently, upon solvation, unnatural αf is strikingly less perturbable (retaining 2T1 conformation in vacuo and water) than natural βf. Unnatural αp and βp ribosides also display low conformational perturbability. These first experimental data on inherent, unbiased conformers therefore suggest that it is the background of conformational flexibility of βf that may have led to its emergence out of multiple possibilities as the sugar scaffold for “life’s code” and suggest a mechanism by which the resulting freedom of OH-3′ (and hence accessibility as a nucleophile) in βf may drive preferential processing and complex structure formation, such as replicative propagation of DNA from 5′-to-3′.

The paper has been accepted by ACS Central Science

Our manuscript about anesthetics highlighted in ASEVA! 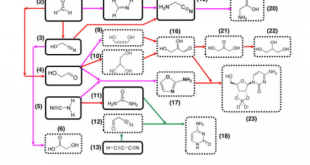 Our paper “Center for Astrobiology: Toward the RNA-World in the Interstellar Medium—Detection of Urea and Search of 2-Amino-oxazole and Simple Sugars” accepted in Astrobiology

Our paper “Conformational impact of the aliphatic side chain in local anaesthetics: benzocaine, butamben and isobutamben” accepted in Chemical Communications